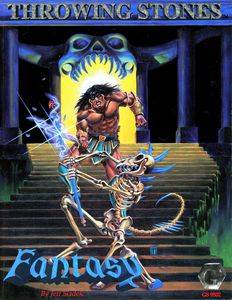 Throwing Stones was released as both an RPG and a "board" game. The board game is a dice-based arena combat game between two contestants. It can result in some tense, close combats. There are many different dice and many combinations of dice available, so choosing your dice before the combat is an important part of the game. Each contestant has four dice that define him. Four dice of the same type can be used, but that limits the player's abilities. The dice were collectible: there were quite a few different types made, some more powerful than others. All dice are six-sided and have special glyphs on them. To fight, players each roll all four of their dice and count up symbols for initiative. Low initiative has to state his action first, then the higher initiative character can respond. Attacks are resolved by announcing the type of attack attempted and throw the dice again. This time the player is looking for Strike and Special glyphs. The opponent declares his action and rolls and hopes to get defensive, counterstrike, and special glyphs. Players record damage, and continue until only one fighter is conscious. Some of the glyphs include: Unarmed combat, various magic spells, knockdown, bypass armor, poison, luck (reroll some dice!), roll with the blow, strike again, counterstrike, disarm, berserk, centered, zealous, sword, stun, skill+, and many others. All are described in detail in the 96-page book. (Only about a quarter of the book is pertinent to the arena combat game; the rest is for the RPG.)