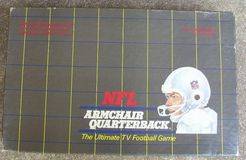 From the back of the box: NFL Armchair Quarterback lets everybody play along with the action of a football game, on TV or at the stadium. Score points by guessing the plays before they happen. Match your knowledge of football strategy against the players, coaches, and everyone with you as you try to predict: Will they complete the pass? Will they run left, or run right? Will the defense force a turnover? Or sack the quarterback? NFL Armchair Quarterback is the first game that lets you play along with the action of a real football game-professional, college, even high school-on TV or live at the stadium. A must gift for football fans of all ages. Comes complete with: 4 playing boards, roster pad, scoreboard, 6 styluses, scoring pen, and set of rules. No television set included.