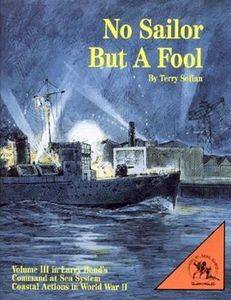 "No sailor but a fool fights a fortress." So said Sir Horatio Nelson. During World War II, fortresses had many guises and some had to be fought. No Sailor But a Fool lets you do just that. No Sailor But a Fool is Command at Sea Vol. 3, covering coastal actions. No Sailor consists of a 64 page book (full color cover) with 210 full color die cut counters, printed both sides (for a total of over 400 separate counters). Seven heavily researched scenarios covering Oslo 1940, Operation Sea Lion, British Channel Convoys, the St. Nazaire action, Operation Cerebus (the breakout of the battlecruisers Scharnhorst and Gneisenau through the English Channel), German surface raider sorties, and Tarawa. The counters, by Steve Pancrazio (from Supermarina I), represent 140 ships ranging in size from motor torpedo boats up through battleships, as well as aircraft, shore batteries, shore installations and amphibious assault troops. In order to use No Sailor But a Fool you must own the Standard Rules to Command at Sea and one of the two data annexes that were included in The Rising Sun or Supermarina I boxed games.