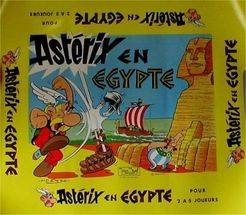 Astérix en Égypte is a racing game set in the world of Asterix, the tenacious "Gaulois" with a habit of beating up Romans and Pirates. Players must race across the grid-based board from the Gallic Village to Cleopatra's Palace, deposit their Palace card, and then return to the Village. The first player to return is the winner. The board is divided into two halves, one sea and one desert. Movement is card based, and each card has two possible uses. Pirate cards can be used to move the indicated number of spaces on either half of the board, or they can be used to place a Pirate Sword across any three squares of the sea half. Roman cards can be used to move on either half of the board or to place a Roman pilum (spear) on the desert half of the board and Magic potion cards can be used to move the player pawn or to remove any one sword or pilum. The board has many choke points that can be blocked by swords or spears, though it is forbidden to totally block access to Cleopatra's palace or the Gallic Village. Players may also gain Papyrus cards by passing over certain spaces on the board, and these cards generally allow the player to move one of the opposing players up to three spaces in any direction.