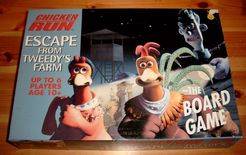 Spin of from the Aardman Animations oscar-winning claymation film. "The race is on for your chickens to escape from Tweedies form before the dastardly Mrs Tweedy feeds them into the Piematic machine Each player has control of 6 chickens (the 6 main characters from the film). You attempt to have your chickens escape through use of ingenious plans, daring, co-operation, judgment, skill, and luck. But first you must have a plan, which will require varying amounts of equipment to construct and implement" Players take it in turn to roll the dice moving their chickens to collect and store escape items and escape plans. Mrs Tweedy and the guard-dogs are also moved by the players to hinder each other.