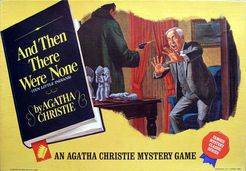 想玩 拥有
And Then There Were None (Ten Little Indians)

At the beginning of each game, all players are dealt several numbered cards. The player that is holding card number one in his hand , is the murderer for that game. The opponent who, by logical reasoning, first names the murderer and the cards the murderer is holding, wins the game. If the murderer names his opponents cards before being discovered, the murderer wins the game. The rarest game in Ideal's Famous Mystery Classic series that also includes Fu Manchu's Hidden Hoard, Murder on the Orient Express and The Case of the Elusive Assassin.