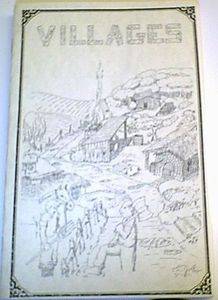 Villages is one of the first "boardgames" ported from a computer game. Unfortunately, that means you have to do all the bookkeeping on paper that the computer could do easily. Most players will find it a bit tedious to constantly have to calculate and record population, crops, seed, food, weapons, etc. However, we sometimes play it at a restaurant while waiting for the food to come - it's not a bad way to pass the time, really, when you don't have less portable games around. The game consists of a rules/events booklet, three six-sided dice, and a pad of record sheets. The game is set in a mythical Renaissance-era kingdom, with each player playing a separate village in that kingdom. You can trade goods with each other each turn, but can only attack others when you roll a "1" for an event table. To play, each player takes a record sheet (you may need more than one per person, depending on how long the game lasts) and a pencil. Determine first player, and write down your starting village: 5 each of people, gold, land, food, and seed. The seed can go into either the ground as crops or storage - you should have some of each for safety. On a player's turn, she rolls the three dice. The red die tells you which table to look under: Attacks, Catastrophes, Good Times, Mixed Events, All Players Involved, or More Mixed Events. The green (or yellow in some sets) die is then the "tens" digit, and the white die the "ones" digit. So a roll of 5, 4, 1 means you look at event #41 on table 5. (That's a bad one, a plague, but it's bad for everybody ...) Once a player has resolved an event, ALL players Harvest crops, make weapons, get people, eat food, barter with other players or the King, store food and seed, plant seed - record this on your sheet with a pencil. You assign your people to weapon making or harvesting - they can't do both in the same turn. Then the next player takes their turn at the event table, after which ALL players repeat the harvest, weapons, food, seed, etc. This is the part that drives some people crazy - there's a LOT of record keeping. The game ends when one player reaches either 20 land units, 200 gold, or reaches a population of 35 people. If you do one of these, you win.