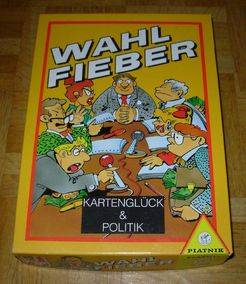 Wahlfieber is a card game that simulates the atmosphere of an election as various political parties fight among themselves for votes. Players assume the roles of party leaders. Starting off with 5 cards in their hands, they take turns to resolve the election. During his or her turn, a player either plays a card or discards one. Playing Vote cards gives a player a stake in controlling one of the nine countries in the game. If a player collects all four cards of a country, his or her party gains total control of the country. Certain Scandal and Authority cards can be played to let players take away votes or even countries from the others. Other Scandal and Authority cards offer defense from such attacks. When a player controls a majority of the nations, he or she wins the game. Players can also pair up to form a coalition and gain the majority needed to win, making it a shared victory between the two.