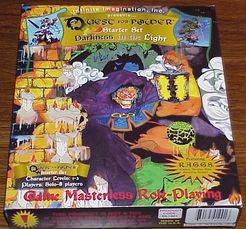 Quest for Power is billed as a "Game Masterless Role-Playing System". In actuality, it is a fantasy-themed board game where the board is constructed each play session from randomly dealt cards. It has all the trappings of a role-playing game: character generation, multiple races and professions, skills, spells, weapons, etc. But the actual game play is very much a board game: move along the board, turn over unexplored cards, and deal with the situation given on them. Players can compete against one another, or work cooperatively. Like any good multiplayer game, there are alliances and treacherous betrayals among the players. In the end, in order to defeat the evil lord in his castle (the main objective of the game) at least some of the players will need to team up because the castle lord is more powerful than any one character can handle. Evidently the publisher had visions of making a whole series of games based on the R.A.G.G.S. (Random Adventure Game Generating System). The sub-title for the game is "Darkness in the Light" and it is called a "Starter Set for Character Levels 1 - 3", presumably because other scenarios and rules for higher level characters were planned. As far as I know, no expansions for the game were ever produced and Infinite Imagination, Inc. is no more.