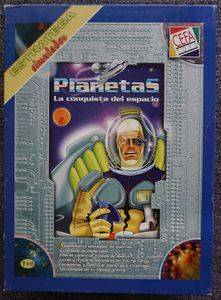 Spanish game of galactic search and conquest. From the rules booklet: "This is the future from we begin. The five Empires and Federations, are in war since several generations ago, changing alliances and enemies as the war goes. All of them has got (paying a high price in life, treasures or simply gold) a base planet from which get access to the Alien Stations. The planet that it guess to be in the middle of the pentagon formed by the stations, stills unseens, it guess to be hidden by shields and energy fields of high technology... It's now when you begin: each of the players must take the control of the betters spaceships, infantry, investigators and others means that each empire put at your disposal, and reveals the mystery of the giant Stations and the hidden planet."