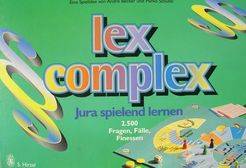 A German trivia game for law students and lawyers. Theme The game contains 2,500 questions and cases from the areas of civil, criminal and public law on 1,000 cards. Goal Before the game, players agree on a number of chips to be collected. The first player to collect that number of chips wins the game. Game play Players move their tokens on a course on the board and, according to which type of space they land on, have to answer trivia questions or argue a case. In the cases, players have to take on different roles - sometimes, they have to act as a defender, sometimes as a prosecutor or judge. The course also contains event and risk spaces and others that challenge the players' memory. A player who successfully answers a question or completes a task earns a chip. The game ends when a player has collected a previously agreed upon number of chips.