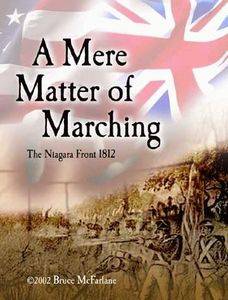 From Microgame Design Group website: "A Mere Matter of Marching is a simulation covering the three summer campaigns on the Niagara Peninsula by the United States Army in the years 1812 to 1814. Historical units are maneuvered on a map until they contact the enemy. Units are then removed to a tactical map and battles are resolved. Units still on the strategic map may attempt to reinforce the battle, or await a further day's action. The 11" x 17" map represents the Niagara peninsula using a point to point movement system. The 280 counters represent the company-sized combat forces involved in the struggle."