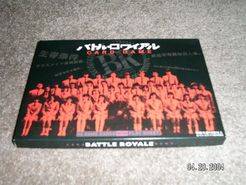 Battle Royale Card Game - based on the hit Japanese film of the same name by Kinji Fukasaku. The card game was a limited release promotional item given out at select cinemas in Japan during the film's grand opening. Basic story of the film: Japan is in a state of civil unrest. In an attempt to dissuade Japanese youth from criminal acts, the government enacts the "Battle Royale Act". A class of students is randomly selected to partake in the Battle Royale Survival Program. Students are given a bag of supplies with a weapon and sent out on an island with a remote detonated bomb around their neck. The game begins. Only one student will survive. It's kill or be killed. If there are no deaths in a 60 minute window, a bomb collar is randomly detonated. Areas of the island are randomly designated "dangerous" and all collars within that area detonate. In 3 days a single winner will emerge victorious. This is a game based on that premise. It comes with 12 student cards, 20 battle cards, 9 location cards, 3 dangerous area cards, 16 event cards and 1 paper game mat.