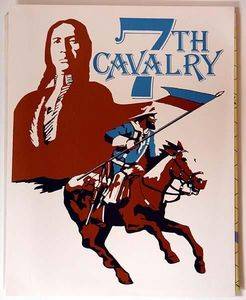 A simulation of the Battle of Little Bighorn. Contains a map, counters and rules. This was a ziplock game, not a boxed game. The Little Big Horn was not the only battle simulated in this game. In fact it was a generic "Indian vs Cavalry" game that depicted several actions during the Indian Wars. There was a "Fort Phil Kearney" scenario and a solitaire "Wounded Knee" scenario also. From my notes written in 1995: The scenarios range from Small Massacres (!!) to Custer's Last Stand, plus an interesting scenario entitled 'What if Custer had brought gatling guns'.