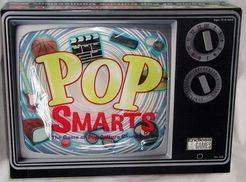 From the publisher... So...you think you know pop culture? You say you're a music buff, but can you name a rock band if we give you 4 of their song titles? Or 3? Or 2? You say you've rented every flic at your local video store, but can you guess a certain movie just by hearing who starred in it? That's what Pop Smarts is all about. It's a game of Pop Culture connections that tests your knowledge of the hip (and not so hip) stuff you grew up with. The Maestro provides the clues, and you guess the common thread that ties 'em together. With 1000 questions in Pop Culture categories like Movies, TV, Music, Books and the grab bag we call Pop-Pourri, there's something for everyone. So think fast, think pop and have fun!