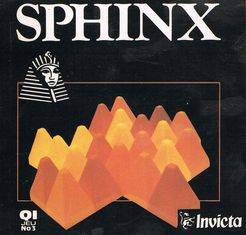 From the box: SPHINX: 2 or 3 players. Contents: 12 yellow, 12 orange, and 12 red pyramids. The object of the game is to get five pyramids of your own color in a vertical, horizontal, or diagonal row by placing one pyramid at a time. Simple Rules. From the rules: The object of the game is to get five pyramids in a row, vertically, horizontally, or diagonally, the first player to do so wins. Pick a color, the person starting first places a pyramid on the board. With the exception of this first pyramid all others have to be placed next to each other side by side - not corner to corner. When all the pyramids are used up, you can move any one of your own color again, as long as it has two adjoining sides free. Looks simple, doesn't it? But there's a lot more to it than meets the eye. Give it a try - good luck!