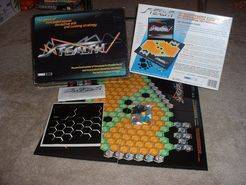 From game summary on box: A brilliant dimension lies before you and a cunning battle must be fought. Your powerful Stealth Force has been protecting its portion of Dimension Gemstone for centuries, but the enemy has been looming ever closer; threatening to conquer your territory. Strategy - You may find that your only protection is your wide array of Stealth Attack Modules and their Concealed Power Pieces as you move through Dimension Gemstone, evading your dangerous opponent. Some of your Power Pieces can be used to destroy, while others can distract and act as decoys. The Starburst, Blaster, Ringer, Decoy and Laser each have special ways of fending off the enemy (see below). As commander of the Stealth Force, you must remember the importance of your mission - defend, retaliate and move with all possible speed. The future of Dimension Gemstone is in your hands. Under Fire - The longer you wait to retaliate, the more time your opponent has to build strategy and plan the next attack. Keep focused as there are concealed dangers that may catch you unaware. Escape - Dimension Gemstone has Portals that are the way for you and your Stealth Force to find a route of escape, or as a means of Surprise attack. They can zip you from one side of Dimension Gemstone to another, swiftly out of danger's way. Your Mission is Clear - and it is of the utmost importance that you keep in mind the dynamics of each Stealth Attack Module. Your victory or defeat may be at stake. As Commander of the Stealth Force, you control the fate of Dimension Gemstone. Each move is an exciting and strategic challenge to outmaneuver your opponent. Dimension Gemstone needs your protection. Seek to conquer, but be careful not to fall into the hands of the enemy. Each type of power piece is different. While a BLASTER can destroy all pieces and Portals in a 2-space range, the RINGER has only a 1-space range. The LASER has a 7-space range limit and can destroy the first piece or Portal in a straight line. The STARBURSTS have the power to emanate energy in a starburst pattern and can destroy all pieces and Portals within a 3-space, straight line.