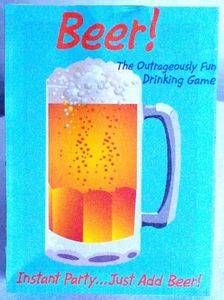 From the box: The hilarious card game where you assign drinks, steal from each other, have blackouts, and even an occasional drunken hookup. Beer! also tests your knowledge of crazy categories like: Types of Liquor, Cartoon Dogs, and Excuses for Not Making Love. You win by holding the highest valued drink cards at the end of the game. And if you win, you get to assign LOTS of drinks to the other players. For 2 - 6 players (add a second deck for 7 - 12 players).