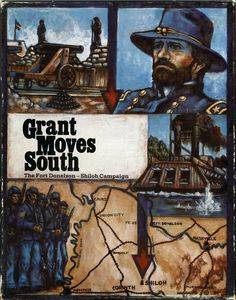 From the back of the box... Early in 1862, a little known General named U.S. Grant overran West Tennessee, taking two river forts and the largest bag of prisoners captured up to that time by an American army. But as the Union troops advanced on Corinth, the Confederates hit back, staking everything on a furious battle in the woods around Shiloh Church. GRANT MOVES SOUTH puts you in command of the Tennessee campaign. As General Grant, you must combine river and overland movement to strike deep into rebel territory against the important points of Nashville, Corinth, Memphis, and Columbus. As the Confederate General, A.S. Johnston, you must use careful maneuver and counterattacks to prevent the ever-growing torrent of Bluecoats from conquering Tennessee. GRANT MOVES SOUTH shows the critical importance of the road net, water movement and the abilities of individual division commanders. The fog of war is thick as you know where the enemy is, but not how strong he is. Gunboats attack river forts, and steamers whisk troops deep into enemy territory.