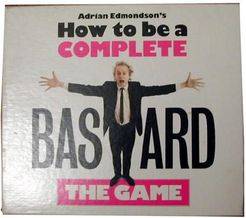 The board represents a lavatory system. Dice are rolled to direct movement on the board. There are three packs of Bastard cards. Players start the game with two or three cards. Bastard cards can be used by any player BEFORE rolling the dice on their turn. Only one card can be used at a time. Most cards contain an unpleasant dare which you or your opponent are required to perform, Failure to perform the dare satisfactorily leads to a move forward as directed down the lavatory system. Other cards allow you to fend off dares, miss turns or simply move any opponents piece you choose. To prevent players from hoarding cards, any player who holds more than three cards at the start of their turn must move forward six spaces. The winner of the game is the player LEAST far down the system when his first opponent arrives in the sewage works at the end.