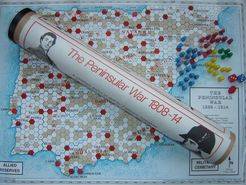 The Peninsular War is set in Spain and Portugal during the Napoleonic wars.The hex map represents a map of Spain and Portugal with most of the major towns and cities represented.One player takes the role of the French whilst the other plays the allies (Britain, Spain. and Portugal). Both players seek to control 8 of the 15 major cities at a set time period in order to win the game or gain an automatic win within the time scale by controlling 12 cities at any time. A "do-it-yourself kit" version of the game (Watt's description) was made available in 1973; a more elaborate version (with wooden pieces) was produced in 1988 in an edition of 400 copies.