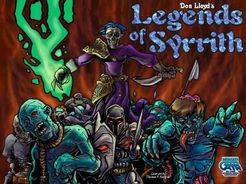 From the publisher's website: Legends of Syrrith is a boardgame for up to 4 players, with playing time usually being 1-2 hours. The boardgame can be played solitaire, as a group or you can compete against other players. In solitaire and competition mode players start the game with a single hero, one henchmen and a small amount of gold. When played as a group each player chooses a hero that they wish to control and the group works as a team to accomplish missions and encounters. As heroes explore Syrrith they will gain powerful items, treasure and additional heroes to join their group. With over 30 heroes and henchmen to pick from, not to mention over 100 different monsters, traps, dungeons and encounters each game will always be interesting. As each players group grows in power they will be able to take on stronger opponents and harder dungeons. Legends of Syrrith can be played by itself as a full stand alone game or it can even be used with the Shadow Wars boardgame. When used with the Shadow Wars boardgame, this expansion takes on a whole new twist. Many Heroes can be used in your armies and the items that your adventurers find are useful in your goal to conquer Syrrith. Heroic warriors, arcane wizards, crafty rogues and ancient items of power will be at your command.