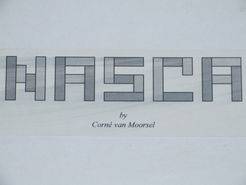 Players take turns placing wooden planks of varying length onto a 10x11 square grid. Each player plays planks of one color. Neutral planks may be distributed on the grid prior to the game, creating variable starting positions. Players' planks may be played directly onto the gameboard, or on top of other planks at equal height. Planks may intersect over only one square, and a plank must be played on top of at least one plank of its own color. The game ends when neither player can place further planks; scores are assessed according to the area enclosed by each player's planks. Because it is often advantageous to place last, matches are played in pairs where each player goes first once.