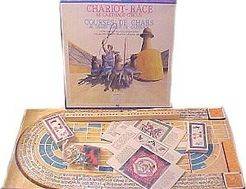 The game consists of a game board representing the race track at the Carthage Circus, a long, oval wooden piece separating the center of the board and used as a lap counter, 4 wooden chariots, 28 Fates Cards, 45 Chance Cards and 2 dice. At the start of the game each player selects a color and the Fates Cards are distributed evenly between the players. On a players turn they roll the dice and move that many spaces forwards. On the roll of an even number, movement must be straight ahead. If an an odd number is rolled, the player can change lanes. The game ends once a player has completed 7 laps of the track. The innovation that stops this from becoming a roll and move game are the Fates Cards and the Chance Cards. The board spaces are marked with either a "C" Chance symbol, an "F" Fates symbol, or a Fatum symbol. If your piece ends its turn in one of the spaces, then you follow the directions. If you land on a Fatum symbol and have the corresponding Fates card then you follow the directions on the Fates card either good or bad. If you land on an "F" symbol then you can swap a Fates card with the player on your left. If you land on a "C" symbol then you take a Chance card and the instructions are followed by the player indicated on the card. This game is not to be taken too seriously and has a large element of luck. The most unique thing about this game is that it is a Tunisian production released for the 28th century anniversary since the founding of Carthage, and as such was produced for the tourist market.