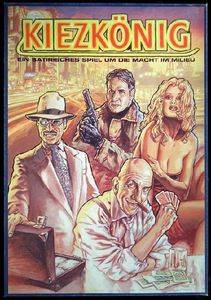 Kiezkönig is a roll-and-move game for 3-6 players age 16 and up. The players attempt to dominate an area to become 'Kiezkönig' (King of the Red Light district). To do so, the players have to collect the 9 cards of a colour, which represent both legal and underworld business (the latter represented by power and capital) in that area. The game board has two tracks, the inner, "legal business" one, and the outer, "underworld" one. There are also event spaces, where players draw event cards, and combat spaces, where players can challenge other players. Players can change tracks via taxi spaces.