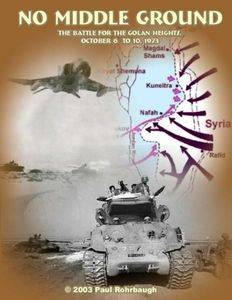 No Middle Ground' is a simulation of the Syrian Offensive (Operation Badr) at the beginning of the Yom Kippur War. The Syrians were attempting to breakthrough to the highly populated Israeli territories to the west, as well as drawing Israeli air and ground forces from their Egyptian allies offensive in the Sinai. The game is intended to be an easy-to-learn game suitable for novices, as well as a challenging and fun contest for veteran grognards. The 11 x 17 map depicts the Golan Heights at 4 km per hex. The 168 counters represent Israeli battalions and Syrian and Arab-allied units brigades.