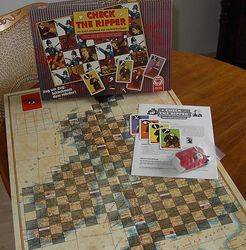 Hunt serial killers with Chess moves. The game board shows a grid of squares on a map of Britain and Ireland. The players try to track down serial killers hiding in cities. At the start of the game, plastic chips which show one of four serial killers are placed face down on the cities. Players choose their detective and place it anywhere on the map. There are also four cards with images of the four killers; the top one of these is flipped open. The active player rolls two dice which show chess pieces. If the two dice show different symbols, the player can move his/her detective the corresponding moves (i.e., any distance diagonal for a bishop). If the two rolls are the same, though, a new killer card is flipped open. If a player lands on a chip, the chip is flipped over - if it shows the same killer as the card, the player can either score points or flip over other chips with the same killer. If s/he makes a mistake, though, all points from that turn are lost. If the killer doesn't match the card, it is just returned and the players try to remember its location. When two detectives meet, they duel each other (higher die roll wins); the winner looking at a chip and placing the loser anywhere on the board. When all 16 killer chips have been collected ("all cases solved"), the game ends and the player with most points is the winner.