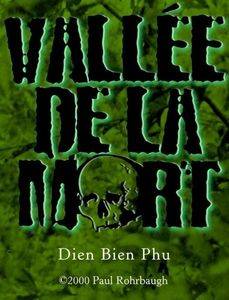 from thr MGDG website: By the beginning of 1954, both French and Viet Minh realized that the war in Indochina was nearing an end. Ho Chi Minh had requested cease-fire negotiations in Geneva, Switzerland, and the French government was looking for a way out that would give them peace with honor. Both sides felt that a "big win" on the battlefield would finally secure at the peace table what they had been unable to obtain in six and a half years of war. The site of this battle would be near a village called, in Vietnamese, "Seat of the Border County Prefecture" located in a distant valley of north-western Vietnam near the Laotian border. The French high command, under General Henri Navarre, reasoned that such remote location could not be successfully attacked. General Vo Nguyen Giap thought the position was nearly impossible to defend. The siege of Dien Bien Phu would be the result. Vallée de la mort is a simulation of this epic siege that ended the French colonial presence in Asia and marked the beginning of a 21-year struggle for national unification. The game is designed for 2 players, one taking the role of the French commander of the fortress complex at Dien Bien Phu, the other of General Giap commanding the Viet-Minh forces laying siege. The game and scenarios are small enough to be played solitaire, however.