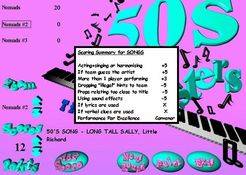 Described by the Publisher/Designer: Are you the Bee Gees when you sing in the shower? Or is your favourite instrument the air guitar? Did you ever wish when you said 'l'll be back', people start to worry! Well this is the game for you! Find that inner star, that shining light, that has been itching to prove its self. Say 'Frankly, I don't give a damn and go for it! Do you have songs that bring back fond memories of yester-year whenever you hear them? Movies you've watched a thousand times because you love them so much? Or music artists whom you worshipped so much that you camped out nights before just so you could get tickets to their concerts? Don’t Give Up Your Day Job! is a party game that will take you back in time. From motion picture blockbusters and icons of the 20th century, through to chart toppers of the past 5 decades, your memory of pop hits, films and TV shows of the 20th century will be tested in this fun and nostalgic game. The game is divided into 5 categories: Pop hits by decades; Films by decades; TV shows; Actors; and Music artists. The objective of the game is to identify which film, song, TV show, music artist or actor your team member(s) is attempting to convey to you through singing, acting or any other means!, as long as it is within the rules of the game. Upto 4 teams can play. With around 10,000 titles in the full version, "Don't Give Up Your Day Job!" will definitely test your knowledge on pop culture. So download the easy version right now at www.cookiecave.com and start reminising! Remember, the sillier you are, the more fun you’ll have. Who knows? You may even discover your true calling in life after playing this game, and actually Give Up Your Day Job!