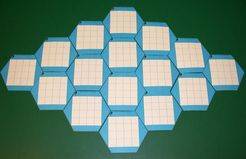 Taken from the publisher's website: To play PLUG INN, the biggest board game in the world, you need a friend and a big, BIG table. If you don't have a big enough table, fear not! The game board can be easily adapted to the size of your choice... In PLUG INN, players compete in a "Macro-Game" by placing their tokens on a board composed of hexagons. Every hex of the game contains a "micro-game" that a player must win in order to place a token in the hex. Macro and micro games are controlled by a few general rules. Even if the general rules do not change, it is always possible to pick up a new Macro-Game or add new micro-games to refresh PLUG INN. The first supplied Macro-Game is Hex. In Hex, you need to place several micro-games hexes in order to form a diamond-shaped board. Each player marks two opposite sides of the diamond with his tokens. Afterwards, tokens are played in the hexes according to the rules of PLUG INN. The goal is to connect your opposite sides with an uninterrupted chain of your tokens. The first micro-games are: -Trip, an interesting variant of the classic Tic-Tac-Toe -Kono, a simple game in which you need to capture your opponent's tokens -Bulo, a reduced variant for the classic game of Nim -Decapawn, inspired by Martin Gardner's Hexapawn, where pawns battle on the board much like in Chess This game was available in the free web magazine GiocAreA OnLine (former partner of daVinci Editrice) as a promotional tool.