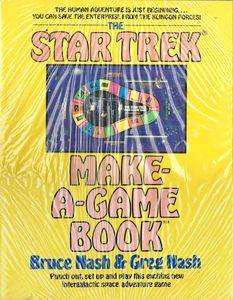 Start Trek: The Motion Picture license published in book form with punch out pieces. The rules state that the goal is to circle the ship spaces on the board until you get six "deflector shields." Then you are supposed to go up the "special corridor" spaces that lead to the bridge. The first player to reach the bridge wins. Unfortunately, I see no "special corridor" spaces that lead to the bridge, so this game is broken right from the outset. _____________________________________ In fact, this is a misprint on the cover and in most copies of the game board that I've seen (including my own). There is supposed to be a "ladder" of three spaces between the TURBO-ELEVATOR space and the Bridge image in the center of the board making up the "special corridor", as (admittedly) very vaguely described in the last paragraph of the rules. (Seeing as how the rules DO specify starting on the REC DECK space, which is just to the left of the TURBO-ELEVATOR space, this presumes that movement around the board is in a clockwise method--something again NOT specified in the rules.) This missing "corridor" can be drawn in with a white or metallic-ink paint marker as shown in the photo of the board in the IMAGES section. Apparently, someone caught this toward the end of the book's run, and some of the gameboards have this fixed. A revised set of rules to clarify these points are also available in the FILES section.