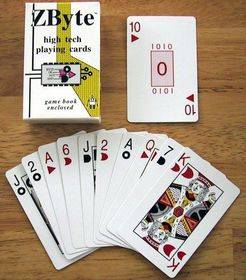 ZByte: hightech playing cards ZByte is a modification of a normal 52 card deck that replaces the standard suits with logic gates: and, or, byte, and not. This not only changes the form, but it also changes the function of the cards. The symbols allow the cards to interact in new and different ways. The number cards also display the bit value and binary representation on the face of the card. Included with the cards is a booklet outlining the functions of the gates as well as games based on the applications of those gates. From the back of the box: ZByte is a revolutionary new design in playing cards based on computers - the first logical change in 500 years! Create and play a new generation of games for the twenty-first century. Or play all your favorite traditional games, such as Solitaire, Black Jack, Poker, and Gin Rummy. This 52-card deck contains the standard number cards, aces, jacks, queens, kings, but with four special suits, and two robot "IF" jokers. Enclosed 32-page book has rules for eleven new games and instructions for ZByte game designers.