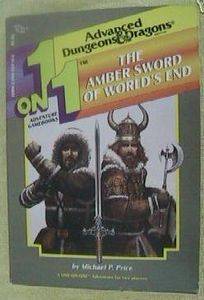 The game consists of two books, one for each player. One becomes Garth, a monk, Master of the North Wind. The other is his rival Uthrac, a powerful warrior. The two of you have been sent on a quest to the perilous place known as World's End to try to gain possession of the magical Amber Sword. Race to be the first to win the magical and powerful Amber Sword. An easy, diceless combat system simulates battle. Part of the series of 1 on 1 Adventure Gamebooks.