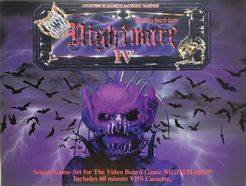 Once bitten, twice shy! Take a turn for the worst and sink your fangs into another 60 minutes of HI-FI fright with The Blood Countess Elizabeth Bathory! - the Sequel to The Video Board GameNightmare that's literally shocking the world! The Blood Countess Elizabeth Bathory is one of the most murderous Vampires in the history of horror. Born in Hungary in 1560, Bathory killed more than 650 young women, and took early morning baths in their blood in a quest for eternal beauty. Imprisoned in her own castle for her perverse crimes, she died at 64. Or did she? Now, it's not just a race against time but a game of sheer survival as this bat out of hell bares her teeth in the most challenging sequel in the Nightmare series. No game ever plays the same twice! Press Play and scream the night away with new sets of Time and Fate cards plus additional Black Rose cards and an interactive Book of Rules. Countess Elizabeth Bathory. Vampire. Nightmare IV... to love and perish forever!