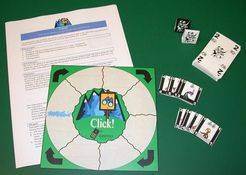 Taken from the publisher's website: Click! is a sophisticated strategy game for two players. The players represent two photographers willing to take pictures of neat subjects, like animals, in order to gather the most points. The game is played in two rounds. During each round, each player plays his own deck of cards: the deck is used both to move the photographer along the path, and to take a picture at the right moment. Animals turn out along the circular mountain trail, and a photographer needs to be ahead of the other if he wants to take a good picture: it is important to have a clear view, i.e. not blocked by anyone. Each subject is represented on a tile, and it is worth a certain amount of points, i.e. "cameras", in this game. At the end of the round, the players exchange the decks so they will both have the same chance of playing, then new subjects are drawn, and a new round starts. At the end of the game, the winner is the photographer with the most "cameras". This game was available in the free web magazine GiocAreA OnLine (former partner of daVinci Editrice) as a promotional tool.