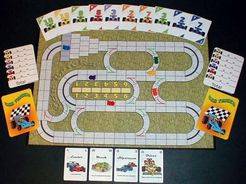 Car Tricks is a unique car racing game in that no one person controls a specific car. Instead, players try to predict the entire order of finish for all the cars in the race. All players can influence the speed of a car through their card play. Cards are played in tricks that are used to determine what car can move that round, how far it will move, who will drive the car, and finally what player will lead to the next trick. The track itself is far from any ordinary race track with various short cuts and back tracks scattered throughout the circuit allowing for drivers of the cars to have quite a bit of control over their progress. In the end, the player that most closely predicted the finishing order of each car will emerge victoriously. A note about how to "short cut" a homemade version: Use the cars from Knizia's Formula Motor Racing game and the cards from Sticheln. Using the cards from Sticheln is a real time and work saver! Granted, they won't have the cool race car look but it's a nice trade off if you have the game sitting around.