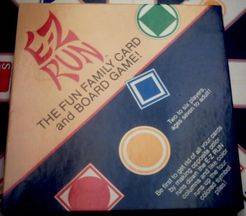 The object is to score the lowest number of points while trying to get rid of all your cards. There are four different colored suits numbered 1 to 11, four E-Z Run cards, and four different symbol cards. The board has four E-Z Run columns, four different symbol card spaces and a stockpile card space. Symbol cards are 25 points each, E-Z Run cards are 15 points each, and cards 1 through 11 are 10 points each. The cards rank from high to low as E-Z Run, 11 - 1, symbol card. Each person is given five cards and then one card is put on each E-Z Run space. Players may play a descending card of a different color on the E-Z Run columns. Symbol card columns are built same color in ascending order. Entire E-Z run columns may be moved to another to free up the column and allow an E-Z Run card play. When a player does not have a play, they draw a card, and do so every time they run out of plays until three cards have been drawn. Then the turn passes. When someone goes out, the scores are tallied. 100 is the end of game with the lowest score the winner.