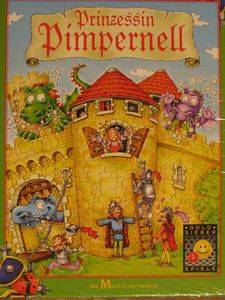 Players are knights trying to save princess Pimpernell from the dragons' cave. A facedown track of tiles is laid out between the knights' castle and the dragons' lair. Each player controls three knights of different sizes. The active player rolls has two options: - roll all three dice (which correspond to the knights) and move the knights in any direction. If a knight lands on an armor tile, the player has to say what armor it is. If correct, the player can keep it, if not, the tile is returned. - or look at an armor tile. If a knight lands on a dice tile, the player can re-roll the corresponding die. On plain tiles, nothing happens. When a knight lands on a tile with another player's knight of the same size, that knight is sent back to the castle. A player who moves a knight into the dragons' lair flips over one of the dragon tiles there. The back side of the dragon tiles shows a piece of armor. If the player has such an armor tile, s/he defeats the dragon and wins the game. If not, the dragon is removed from the game and the knight returns to the castle to go and try again.