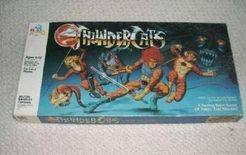 After their planet Thundera exploded, the ThunderCats came to Third Earth to start new lives. But they were followed by the Mutants of Plundarr, and are also plagued by Mumm-Ra, the ever-living, a creature from Third Earth. They seek Lion-O's mystic Sword of Omens. When Lion-O needs help he raises the sword and shouts, "ThunderCats! HO!" to summon the other ThunderCats: Pantro, Tygra, Cheetara, Wilykit, Wilykat and Snarf to aid in his battles and protect Third Earth. Game Includes 1 Gameboard, 8 Cardboard Pawns w bases, Deck of 54 cards, Sword of Omens, and 2 plastic Diamond Jewels. Instructions on box top. There is a cardboard insert box cover with great graphics and descriptions of each character: Lion-O - the brash and courageous young lord who leads the cats on their journey. Weapon: the mighty Sword of Omens containing the eye of Thundera, the source of the cats Power. CHEETARA: Friendly and compassionate, Cheetara is the fastest of the Thundercats because of her ability to move at super speed. Weapon: A magic staff she uses as a throwing stick, a pole vault or spear. WILYKAT &amp; WILYKIT: These two pranksters are mischievous and disrespectful of the older Tcats. Weapons: a whole arsenal of powders.. sneezing, itching, smoke screens and more -- designed to confuse the enemy and make a quick escape! PANTHRO: a skillful engineer responsible for making weapons and vehicles for the Tcats. Special powers: superb martial arts skills and exceptional acrobatic abilitiy. Weapon: a set of nunchakus he uses to stun his attackers. TYGRA - The architect in charge of designing &amp; building the Tcats new home. The Cats Lair. Special power: perfect camouflage ability with any background. Weapon: a bolo whip used to entangle the legs of his enemies!