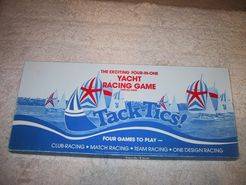 Tack-Tics is a yacht racing board game, developed by a New Zealand yachtsman with experience in international team racing in Australia, Hawaii, and the United States. It is endorsed by the New Zealand Yachting Federation as an educational aid to yachting. Tack-Tics includes rules for four different types of racing requiring increasingly skillful play: CLUB RACING For two or more players. This game introduces the inexperienced to the general rules and tactics of yacht racing. MATCH RACING A game for two players with more experience. The use of good tactics is an essential part of this game. TEAM RACING A game for up to six players, each controlling three yachts. With up to 18 yachts on the board at one time, this type of racing further tests the tactical skills of the players. ONE DESIGN RACING For two to six players. In this game, instead of rolling dice to determine movement, the players agree to a fixed number of movement points per turn. This race tests the skill of even the most experienced yachtsman.