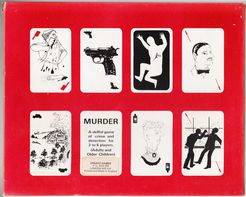 Murder is a somewhat unusual deduction game. The equipment consists of a deck of (seemingly homemade but fairly sturdy) cards and a cloth bag. The cards include a group of times, a number of opportunity cards (all identical), a group of motives (all with appropriate quotes, e.g. "Love and murder will out. - William Congreve" for the Love card), "You Are Murdered" cards, and 10 sets of actual murder cards, each set containing an alias, method, weapon, and place - for example, Archbishop, Ran Over, Car, and Avenue. Each player gets a You Are Murdered card and a random assortment of others, and in turn takes a card and discards one into the bag. The last player in the round takes the bag and can select one of the cards, discarding the rest face up (first player then rotates). The object of this part is to collect a 4-card murder set plus a motive, opportunity, and time. When you have these you discard You Are Murdered and the last player in the round becomes the victim when that card is pulled from the bag. At that point the game shifts into deduction mode, with everyone trying to deduce which player was the murderer and what his or her alias, motive, and time cards are. Unfortunately the rules go very vague at this point - questioning is totally free-form, there is no way to score (and the end doesn't come until everyone has the solution, apparently), and they don't address the issue of what happens if there is more than one murderer. However, it may be possible to invent new rules to fix these problems.