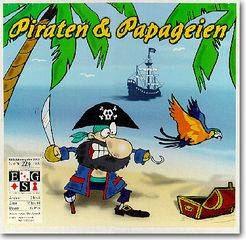 An interesting game that was a winner at the European Game Collectors Guild of 2003. A limited set of 300 have been made by Playme.de and were sold at Essen but also still available from their site. The game board is nine by nine grid with some islands in certain cells. Each round, three parrots fly onto the board from directions based on die rolls. Players then select movement options from different-complex cards, and simultaneously decide how their ship will move. The Parrots fly and then the ships move, and when a ship "catches" a parrot it keeps it. But if later the ship moves across an island, they lose a parrot as it flies off the ship to look for food. Whoever collects the most parrots by game end wins.