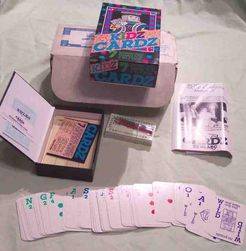 Cardz is a set of 78 letter cards. There are three basic suits with 22 letters in each suit (one of everything except J, Q, X, and Z). There is also a wild suit which has the difficult letters, one of each vowel, and three totally wild cards. Rules are included for a number of different games, mostly adaptations of traditional card games (there's Cardz Rummy, different versions of Cardz Poker, etc.). The game that isn't an adaptation of a card game is very similar to Upwords. A Kidz Cardz set was also sold - this has the same deck and many of the same games, but removes the rummy and poker games and adds some simpler ones (one based on war, for example). The background of the game is of some interest. It was invented by Hannah Cannon, a 12-year-old girl whose father formed a company to market it and managed to get a fair amount of publicity for it - Hannah was interviewed on Good Morning America and got a one-page writeup in People magazine. (Her father, Doran William Cannon, is a former screenwriter who seems to be good at promotional activities.) It was supposedly sold in places such as Waldenbooks and Bloomingdale's, but references to it are hard to find now.