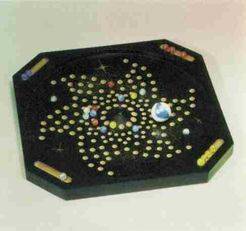 The game comes with a wooden game board, 6 marbles in 4 colors, and 1 big paperweight sized marble In the cluster in the middle of the galaxy (GAME BOARD) is a dangerous place for stars The object of the game is to knock marbles into this oblivion so that they go away. Setup: Set the board in the middle of the table. Take a corner and put the marbles of your color in the groove on the edge. Each player starts with 5 marbles. The sixth is a spare, but you can leave it in the groove to mark which player is which color. Rules: Roll the marbles onto the board. You can swing, drop or spin a marble onto the board. Ignore the rules for removing marbles until all of the marbles have a home on the board. The youngest player starts. He takes the big marble and rolls it onto the board. He should try to push opponent's marbles to the inside and his own to the outside. Let the ball roll around until all marbles settle. End of a turn: At the end of the turn if a player has a majority of marbles in the innermost circle, that player must remove a marble. Only one marble is removed per turn and the owning player chooses which to remove. If there is no obvious majority (2 or more players are tied) in the innermost circle, no marble is removed. If there are no marbles in the innermost circle, then consider the marbles in the next circle out. If there is a majority, a marble will be removed. If there are no marbles in the inner two circles, then look at the 3rd circle out. If the third circle is empty, no marbles will be removed. Check for removing marbles at the end of each turn. End of Game: A player with no more marbles is out of the game. Last player to have marbles on the board wins.