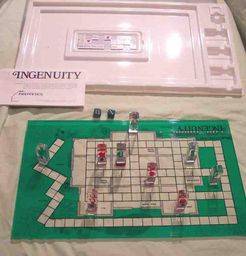 Ingenuity is an interesting attempt from an obscure Israeli company at a Mastermind/Black Box type deduction game (where one player sets up a puzzle and the other solves it) with a murder mystery theme. The setter decides which of the 8 characters was murdered, who killed him or her, and with what weapon. Clues to these elements are attached to the characters (for example, whether the killer was male or female, a family member or servant, etc.) and the pieces placed on the board. The murderer can have a false clue. The solving player moves a detective figure around the board (which shows the floor plan of a small mansion and garden) encountering characters and looking at their clues. The setter gets turns to move characters to get away (presumably) from the detective. The object is to solve the mystery in as few turns as possible - as in other games of this type it is always played twice, with the roles reversed for the second game. The pieces really make the game - the characters are large Lucite blocks with simple pictures on the fronts and metal circles on the backs - the clues are on small magnets which attach to the circles. In addition, a piece of red plastic is provided to serve as the pool of blood in which the victim is found.