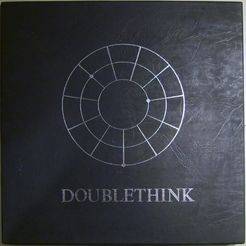 Doublethink is based on a puzzle, namely to place three copies each of eleven letters (those in "Doublethink," naturally) on a figure consisting of three concentric circles joined by eleven radial lines so that every letter is connected to every other one exactly once. When played as a two-player game, each player gets fifteen letter chips (the remaining three being placed on the board) and places one at a time in an effort to form connections and make it impossible for the opponent's chips to be placed. A player scores a point for each connection he or she makes and also for each connection the opponent is prevented from making. The score can be read from an erasable board (the game also includes a pen) which tracks the connections made for each letter.