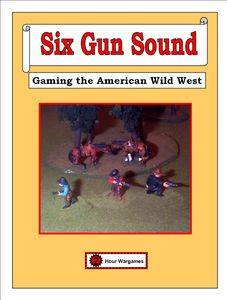 From the designer: "Man to man combat and campaign system in the Old West. Fast play and easy to learn Six Gun Sound kicked off the man to man combat games that have become known as the Mayhem series. Not only does Six Gun Sound provide a realistic "quick &amp; deadly" combat system it also has a campaign system. The campaign is centered around the old Southwest and includes Kansas and Texas. The system easily links the various gunfights together to tell the story of the Old West. To see a review of Six Gun Sound press here...." Skirmish miniature combat for the Wild West.