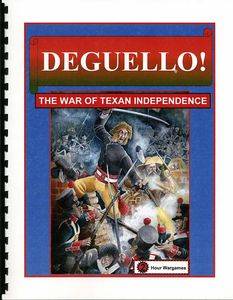 From the designer: "In 1835 men from all over the world came together to a little mission located in the Mexican province of Texas. It was called the Alamo and the deeds that occurred there in early March helped to shape the destiny of the United States of America. But the Alamo was only the most famous of the battles that occurred during the Texas War of Independence. And now with Deguello you can recreate history and relive the sharp struggle for Texas independence. By generating the scenarios for you, DEGUELLO lets you link all your combats into one long continuous story. Easy to learn game mechanics and a unique "reaction system" combine to make every game different. Set an ambush, pursue the enemy, or defend the walls, it’s all here for you. Playable with any already based figures DEGUELLO can be played solo or with others. The Mexican band strikes up the “Deguello”, the Spanish tune for “no quarter”. The battle is about to begin. Are you ready?" Simple miniatures game for Texas War of Independence.