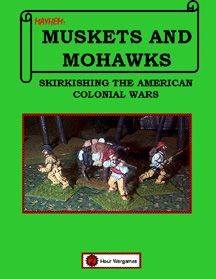 From the designer: "Covering both the French &amp; Indian War and the American War of Independence MAYHEM: Muskets &amp; Mohawks is both a skirmish combat game and campaign system. Whether you're on a mission with a group of Roger's Rangers or leading the charge with the 1st Maryland, MAYHEM - Muskets &amp; Mohawks allows you do it in a realistic way. Linked by a simple "encounter" system all battles can be fought as a campaign. Playable with any already based figures. Perfect for playing alone or with a group of friends. A great way to get into a new period for a low investment in time and money..." Skirmish in colonial times with miniatures.