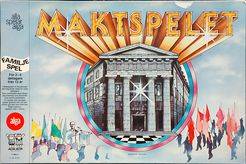 In Maktspelet, players assume the roles of Swedish political party leaders and compete to form the nation's next government. There are 349 seats (mandates) up for grabs and the government can only be formed by a force with 175 or more seats. On their turns, the players move their pieces on the board. Most of the spaces on the board are Profile spots that give seats to the controlling party. Players contest for these spaces by participating in a closed bid, using their Argument cards. The values on their selected cards is added to the value of their party's color on the spot, and the party with the higher total value wins the Profile. Players can also moving their pieces to the TV debates spot and try to bluff their way to win more seats. The Chance spots instruct players to draw a Chance card, making them win or lose seats, or even swap electorates. Players are free to wheel and deal in this game. The game ends when all seats have been distributed. The winner is the leader whose party has the required majority. If no one has a majority, two players can join forces to achieve the required number and be joint winners. Components list: 1 x Rulebook 1 x Gameboard 4 x Plastic standees (1 in each players color) 72 x Chans cards 20 x Profil cards 15 x Minister cards 4 x 27 Argument cards (divided in the 4 player colors) 397 mandates (349 + extras according to the rules)in 24 x Larger plastic 10 mandates 156 x Smaller plastic 1 mandates